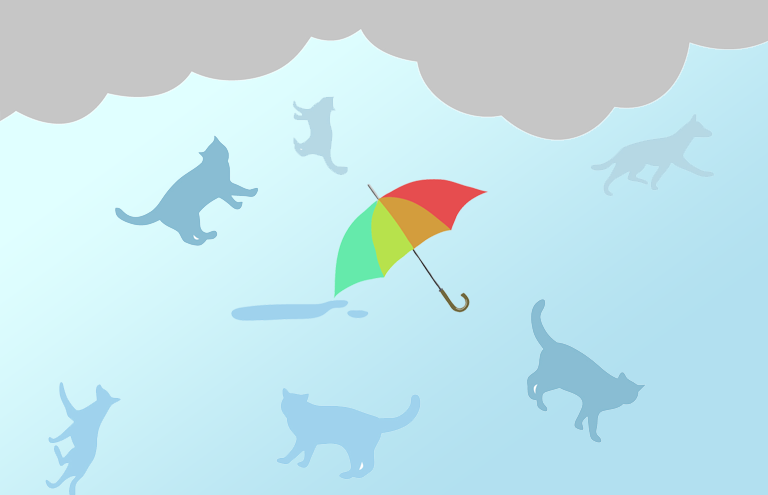 Both Achimov and Martin were put on the defensive by a public service worker union’s clever publicity stunt. The union tested Portage using a randomly selected idiomatic phrase involving cats and dogs and rain and (Surprise!), the system translated it literally.

But why the row? Canada’s Translation Bureau is poised to launch Portage, the result of a decade’s worth of investment and development, on April 1, 2016. The machine translation tool will be made available to Canada’s 350,000 civil servants, who work with the country’s two official languages, English and French.

Machine translation is nothing new to Canadian civil servants. According to Translation Bureau CEO Achimov, government employees log over a million uses of Google Translate each week.

So, Canada’s Translation Bureau noticed that government employees were heavy users of a free online machine translation tool. They also knew that their own government has invested significant resources into developing its own statistical machine translation engine. Finally, the Bureau sits on a huge data set of highly relevant reference texts.

Connecting these dots and making Portage accessible to all government employees seemed like the logical thing to do. Select politicians, federal translators, and the union would have none of it.

MP Greg Fergus of Canada’s House of Commons has vowed to stall the use of Portage. He was quoted in a CBC News article as saying there was no shortcut to proper training to make sure Canadians could speak both official languages effectively, and that using Portage with all its errors would be a detriment to bilingualism.

Then came a federal translator. In a CBC News Ottawa interview, an employee in the Translation Bureau said morale in the bureau is low. Asking that his voice be disguised for fear of losing his job, he said, “It is awful actually. People are leaving the bureau to try to find other jobs in civil service. If this tool is implemented…there might be many jobs that are going to be lost.”

In the same CBC News Ottawa interview, Tremblay said, “What I see as a real danger is the fact that, with a few hundred thousand users―the public servants―it’s very unlikely that a tool like this one can ever be better than Google Translate. My fear is that…public servants might think the Translation Bureau’s quality is no good. But it’s not the Translation Bureau’s or my members’ professional skills that are in question here.”

In addition, Tremblay cited recent job losses at the Translation Bureau, where according to CBC, nearly 700 jobs were cut in the last five years and an additional 140 jobs were on the line through attrition. Tremblay clarified, however, that the job losses were not due to technology but rather the previous government’s ideological drive to outsource to the private sector.

Asked point blank if she was more upset at the quality of Portage translations or that CAPE members could lose their jobs, Tremblay’s reply (“neither”) did not really clarify her position.

She said, “I have to be clear about this: This tool never is meant to replace professional translation. It’s not meant for any material that goes out to the Canadian public.”

She further explained the Bureau’s new MT-human hybrid model, saying that Portage helps improve official language by harnessing previous translations and that it actually links to a human translator. “When you’re typing something and you want to translate it officially, you actually get a direct link to a translator at the Translation Bureau.”

R&D director, Joel Martin, tried to explain the test mishap, pointing out how training is everything with statistical machine translation: “The idea behind these MT systems is to have many, many examples. If the (previous) examples that are fed into Portage don’t include ‘It’s raining cats and dogs,’ it won’t be able to translate that.”

He also stressed the security benefits of running a proprietary machine translation engine, saying that it was ideal for government use, something his corporate clients appreciate. “A lot of our customers, our licensees, one of the advantages they see is their translations do not leave their corporate walls. If you send it to Google Translate, it gets stored in California, forever.”