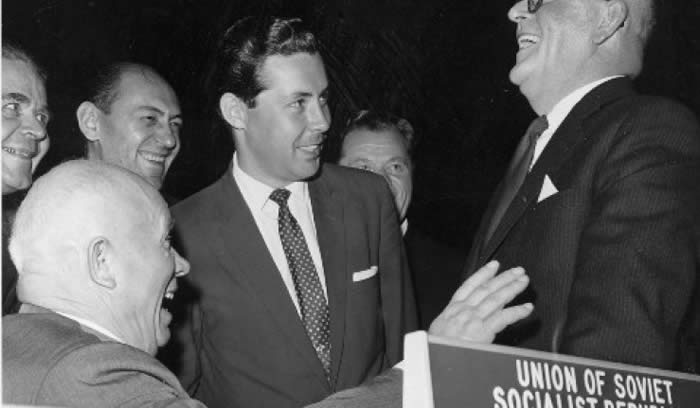 Soviet Premier Nikita S. Khrushchev, left, jokes with United Nations Secretary General Frederick H. Boland, right, during the UN General Assembly session at the United Nations headquarters in New York City on Oct. 3, 1960. At center is Khrushchev’s interpreter, Victor Sukhodrev. Legendary Russian interpreter Victor Sukhodrev has died in Moscow at the age of 81. He was widely known as the personal interpreter of Nikita Khrushchev, Leonid Brezhnev and other Soviet leaders. Sukhodrev’s part in forming the image of top USSR officials and his quick wit are hard to overestimate. His experience of working for top USSR officials is described in the book of memoirs “My language –my friend”. The Voice of Russia talked to George Watts, prominent radio announcer and translator, to honor the memory of the legendary interpreter. What are you memories of meeting and working with Victor Sukhodrev? We had not met yet, I saw him first on TV working with the station for the Soviet Union translating primarily for English-speaking leaders across the ocean, I mean the US and the UK, and he was doing a magnificent job. I never thought I would ever meet him. But it was in the mid 1970s that I was fortunate enough to meet him and then we became very close friends and we worked together at a number of international conferences. Victor Sukhodrev was a personal interpreter of Khrushchev and Leonid Brezhnev but he also worked at international conferences and I had a good fortune to work in the same booth together with him at a number of conferences. One of them was in Almaty, the capital of Kazakhstan at that time, that was in the 1970s. Had you heard of him before you met him? Was Mr Sukhodrev famous among his colleagues at the time already? I didn’t meet him personally but I saw him on TV performing as an interpreter and he will go down in history as one of the persons at the focal point of relationships between the US and the Soviet Union in those years. What in particular made him a legend? First of all, I can tell you that he was not only a top-notch interpreter, both as a personal interpreter, there is quite a difference between being a personal interpreter and a conference interpreter, but he had a remarkable voice, a very rich baritone voice and his articulation was absolutely perfect in both English and in Russian. He told me, and I read his book, he started studying English while living in the UK before the war. So, that was a starting point for his career as an interpreter, as I understand, a lot like myself. And actually he said that it was important for a person to be fluent in his native language. He was fluent in both languages. He was a bilingual person. He could speak freely on any subject both in English and in Russian. Voice of Russia