Blog - Latest News
You are here: Home / Who do you think you’re apostrophising? The dark side of grammar pedan...
0shares 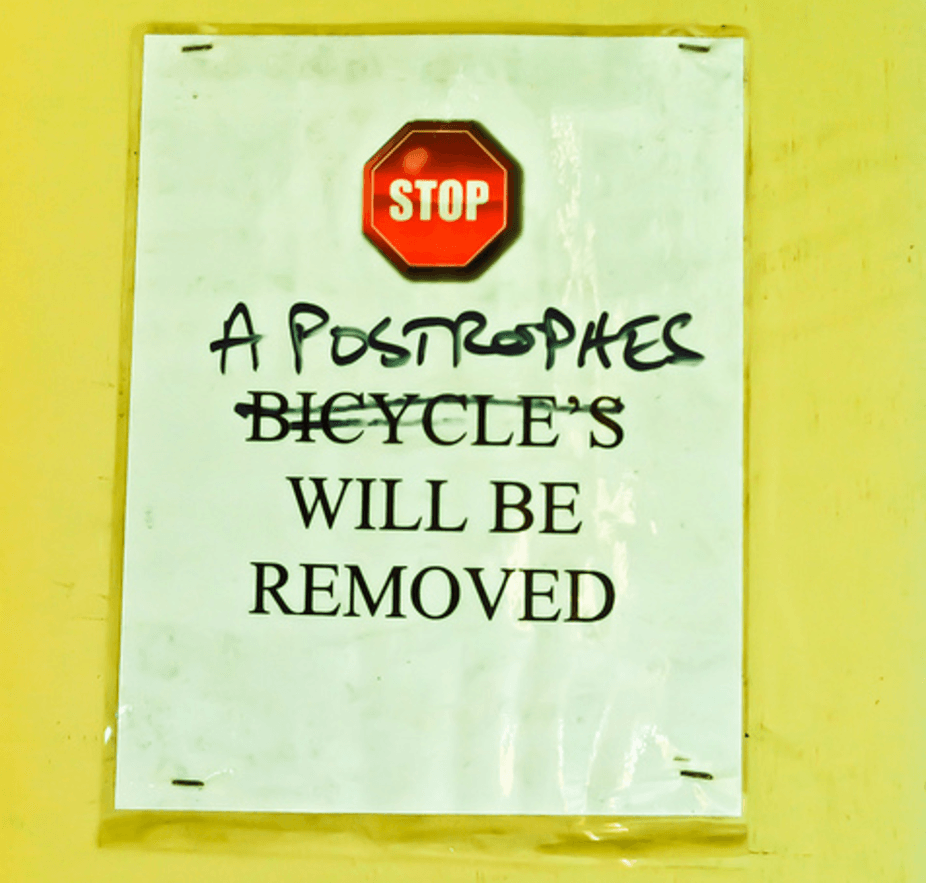 He’s been called “punctuation’s answer to Banksy”. A self-styled grammar vigilante who spends his nights surreptitiously correcting apostrophes on shop signs and billboards. The general consensus is that he’s a modern-day hero – a mysterious crusader against the declining standards of English. But his exploits represent an altogether darker reality.

The man himself is not particularly offensive. In a BBC Radio 4 report, he comes across as a reasonable person who simply feels a compulsion to quietly make a difference to what matters to him. He doesn’t ridicule, he doesn’t court publicity, he simply goes out and adds or removes apostrophes as required. And he does it with care, usually.

So what’s the problem? The problem lies in what this kind of behaviour represents and therefore normalises. In championing our vigilante, we are saying that it’s okay to pull people up on their use of language. It gives people the confidence to unleash their own pet peeves onto the world, however linguistically dubious.

The grammar vigilante himself appears to have a specific type of target, and his approach is nothing if not considerate. However, there is another type of pedant who is not so subtle or self aware. Some people think nothing of highlighting inconsistent punctuation wherever they might see it, however innocuous or irrelevant it might be (apostrophes rarely actually disambiguate – after all, we get along fine without them in speech).

Never mind that it’s a handwritten notice in a shop window, written by someone for whom English is a second (or third, or fourth) language. Never mind that it’s a leaflet touting for work from someone who didn’t get the chance to complete their education. They need to be corrected and/or posted online for others to see. Otherwise, how will anybody learn?

After all, apostrophes are easy. If people would just take a bit of time to learn the rules, then there wouldn’t be any mistakes. For example, everybody knows that apostrophes are used to indicate possession. So the car belongs to Lynda, the car is Lynda’s. But what about the car belongs to her, the car is her’s? Of course not, we don’t use apostrophes with pronouns (although this was quite common in Shakespeare’s time) as they each have a possessive form of their own. Except for one that is, which still needs one: one does one’s duty. It doesn’t need one though – it’s is something.

Then there’s the question of showing possession with nouns already ending in “s”: Chris’s cat or Chris’ cat? Jess’s decision or Jess’ decision? Or plural nouns ending in “s”: The princesses’s schedule or the princesses’ schedule? I don’t remember it being this difficult in the 1980’s/1980s/’80s/80s/80’s.

We definitely don’t use apostrophes to indicate plurals, something that routinely trips up the fabled greengrocer’s with its potato’s (although it was once seen as correct to use apostrophes with some words ending in a vowel). But what about when we need to refer to dotting the i’s and crossing the t’s, or someone makes a sign saying CD’S £5.00?

The point is, while some are clear, many of the rules around apostrophes are not as transparent as some people would have us believe. This is largely due to the fact that they are not actually rules after all, but conventions. And conventions change over time (see David Crystal’s excellent book for a detailed history).

When things are open to change, there will inevitably be inconsistencies and contradictions. These inconsistencies surround us every day – just look at the London Underground stations of Earl’s Court and Barons Court, or St James’s Park in London, and St James’ Park in Newcastle. Or business names such as McDonald’s, Lloyds Bank, and Sainsbury’s. Is it any surprise people are confused?

Of course, all of these conventions are learnable or available to be looked up. But if people haven’t had the opportunity to learn them, or do not have the skills or awareness to look them up, what gives other people the right to criticise? Are those who point out mistakes really doing it to educate, or are they doing it to highlight their own superior knowledge? Are they judging the non-standard punctuation or the sub-standard person?

Picking on someone because of their language is always a cowardly attack. Linguist Deborah Cameron makes the point that this is still the case even when highlighting the poor linguistic skills of bigots and racists on social media. Tempting as it is to call out a racist on their inability to spell or punctuate, by doing so we are simply replacing one prejudice with another, and avoiding the actual issue. As Deborah Cameron says: “By all means take issue with bigots – but for their politics, not their punctuation.”

Apostrophes matter, at least in certain contexts. Society deems it important that job applications, essays, notices and the like adhere to the current conventions of apostrophe usage. For this reason, it is right that we teach and learn these conventions.

But fetishising the apostrophe as if its rules are set in stone, and then fostering an environment in which it is acceptable to take pleasure in uncovering other people’s linguistic insecurities is not okay. The grammar (punctuation?) vigilante of Bristol is relatively harmless. But he is the unassuming face of a much less savoury world of pedantry.

Translation platforms cannot replace humans 18 open source translation tools to localize your project
0shares
We use cookies to give you the best experience on our website. By continuing to use this website, you consent to our use of these cookies.ContinueRead more